The Abraham Rebus Theory: James Edward Homans' Theory from 1936 on the Name of Abraham Spelled Out in Facsimile #1

As you probably read in the previous post, Romolo Simonetti, a friend of mine, contacted me about a book entitled Joseph Smith as Translator.  Up until he brought it to my attention, I was unaware of the existence of this book.  Romolo sent me some scanned pages from it by email.  I purchased a copy on Amazon, and it came this week.  Romolo contacted me to find out what I thought of it.  And so, I am giving him credit for bringing it to my attention.  I wouldn't have been able to do this at all without his immense help in this matter.

Surprisingly enough, the book was copyrighted by Heber J. Grant who was President of the Church at the time.  It was published in 1936 by the Deseret News Press.  It was written by a person named "R. C. Webb," (Robert C. Webb), which is definitely a pseudonym.  Research seems to show that his real name was James Edward Homans, and that he was not even a Mormon.  He appears to have been some sort of Christian, perhaps Episcopalian.  Whatever the case, it seems that he had a positive opinion on the subject of the Book of Abraham.  Otherwise, he probably would have not written the things that he wrote, which seem to be almost Apologetic towards Mormonism and the Book of Abraham.  Some have charged that he was a hired gun for the Church, sort of an apologist for hire, who was not even a Mormon.  Whatever the case, Kevin Barney wrote about it here:

Anyhow, now let's get into the meat of the Abraham Rebus Theory.
Now, from my examination thus far of the text of Homans' book, he didn't refer to it as the word "rebus" as I am doing.  However, that is precisely what Homans was suggesting here:  that the characters/pictures in Facsimile #1 identified as "Abraham in Egypt" actually may spell out the name "Abraham."  And this is actually something the Egyptians did quite a lot.  And this literary device is known as a "rebus" among Egyptologists.  See here for some examples, both from Egypt as well as from our culture and our time:

As this picture from Wikipedia shows the typical example is this statue of the Pharoah Ramses II as a child: 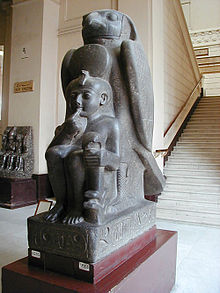 The items, as Egyptian characters/pictograms, spell out the word Ra-mes-su, which is clearly the name Ramses.  As one commenter writes:


A famous Ancient Egyptian rebus statue of Ramses II consists of three hieroglyphic elements. A large falcon representing Horus the sun god – RA, who is standing behind a sitting child – MES, and the child is holding a sedge plant stalk in his left hand – SU. Remember we are not looking at these hieroglyphs from the perspective phonograms. These three items compose the rebus RA-MES-SU or as we prefer Ramesses. (https://egyptologyman.wordpress.com/2011/02/17/the-rebus-principle/)

Anyhow, as is readily apparent, the rebus principle is a very common thing in Egyptian Iconography, as any Egyptologist can tell you.  Here is a scan of Facsimile #1, Figure 10:

Of course, in the explanation for Facsimile #1, it says simply "Abraham in Egypt," but makes no further claim about the meaning of the character.  But it seems clear that it is pointing to this group of characters, not just the person on the Lion Couch, as meaning "Abraham in Egypt."

Here is the same group of characters from the woodcut for the original Facsimile #1 as it appeared in the Times and Seasons, as it appears on the Joseph Smith Papers website, with the exception that I flipped it horizontally, so that it is mirror image so it appears as it should correctly: 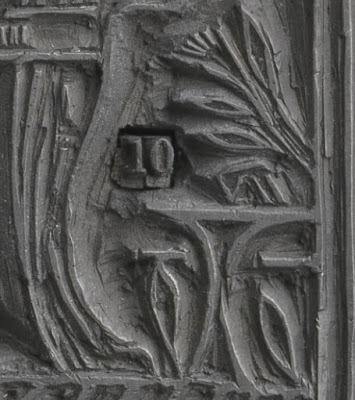 And here is a scan taken from the Joseph Smith Papers web site of the same item, directly from the original Sensen papyrus: 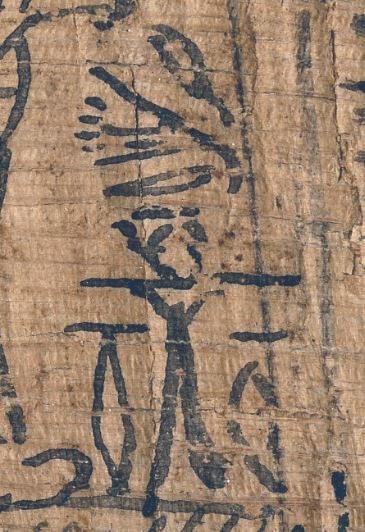 So, with this image now, if there was ever any question about the original characters/pictograms we are dealing with, it is still clear that they are still clearly the same as in the woodcut and every other rendering.  Now, here is a scan from page 140 of Homans' book where he presents his analysis of the characters: 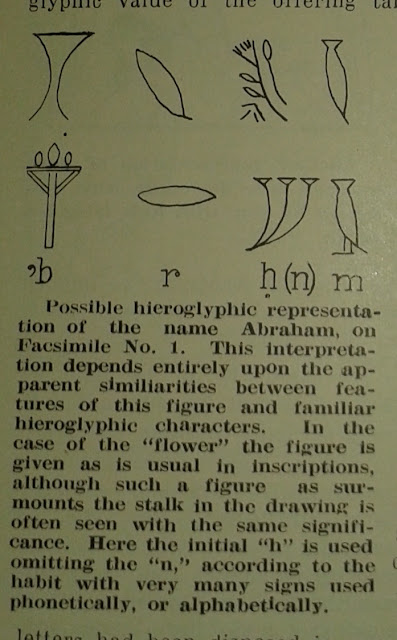 Now, Homans writes the following in the text on page 140:

Since we see here a group of separate objects--flowers, etc.--with the offering table, we may assume that the caption could be understood to imply that the meaning, "Abraham in Egypt," is derivable by combining sense properly expressed.  And, although it is not necessary to suppose that the man who first drew this picture intended to do more than to show the objects represented, the fact that each separate object has a definite Hieroglyphic significance, and that they may be combined to spell the indicated caption, or to make a close approach to the name, "Abraham," in Egyptian characters, must be another ground for a suspicion that real knowledge is behind the renderings given us.
Thus, taking these objects in succession, we find that the hieroglyphic value of the offering table is that of ab or ib.  The compressed oval to the right of this table suggests nothing more familiarly than the common picture of the human mouth, or lips, which has the phonetic value, r.  the cluster of flowers surmounting the table correspond to the combination chn (hard "h" and "n"), although, after the analogy of uses of other syllabics, we may take it for "h" alone.  Then, the "seed-pod" to the left of the table, while of indeterminate value in itself, closely suggests the familiar "owl," the equivalent of m, as it is often written and may be taken to indicate it.  Thus, as may be understood, any one familiar with the shapes and sound-values of Egyptian signs could have proposed the rendering, AB-R-H-M, as a possible combination, precisely as if several English letters had been disposed in any disorderly manner, and he had arranged them, so as to spell some intelligible word or name.  He evidences no more than his ability to read the written characters.  This ability, however, is very close to the matter which we have been attempting to discover, if possible, in all of our previous analysis.

So, now, this leaves us now to analyze Homans' contention more closely.  As is clear here, he is reliant in a few cases upon the principle that something strongly or quite closely appears like something else, so it can be taken for that thing, such as in the case where he says that the apparent "seed-pod" very much looks like the owl hieroglyph, which, in the Egyptian Alphabet, happens to be the letter M.

Is he justified in this, to suppose that because it closely appears like something, that it can be taken for that thing, or rather, that the ancients intentionally took it for that, or that it could be re-appropriated mentally, or substituted for it? The answer is yes.  Let me explain why.  Because in many other cases, I have encountered the same principle, which I call visual affinity:  that an assigned meaning to a character, or identification of a character, is sometimes dependent on its visual affinity to another character, or perhaps that somehow an association is made between characters because of visual affinity, and there is a mental substitution made.  Here is an example, where the character for Kolob "Khnum-Ra" in Facsimile #2 has a clear visual affinity to the character that was appropriated for it in the columns surrounding Facsimile #1.  See the following article on this:

And there are multiple other examples, some of which that are even directly connected to this current subject at hand, in the case of the lotus flower being used as a symbol for Abraham, because when it hangs, it has a visual affinity to the W character, which is the rope coil (which looks like a comma):

Anyway, the point is, on a number of levels, Homans' theory seems to check out.  Because he is correct about his interpretations, it seems to me.  Firstly, he interprets the offering table as ab or ib, which is the hieroglyphs numbered as R1 or R2 in Gardiner's sign list (i.e. there are two versions or variants):

Homan seems to have neglected to mention this.  But through a bit of deductive interpretation and detective work, we can reverse-engineer what he was thinking.  As we see here, above, the offering table itself is kh3t, or kh3wt, and is not pronouced ab or ib.  Rather, it is through the visual affinity principle yet again, that we actually get this pronunciation for this as ab or ib.  This is because the hieroglyph that is actually pronounced ab or ib happens to be the spear on a standard (flag staff or pole) hieroglyph:

As you can see, this is actually R15, and this is justified through its visual interchangeability/substitutability/affinity with R1.  Homans is correct when he says that the compressed oval is the r hieroglyph from the regular characters in the Egyptian Alphabet.  He is also correct that he chn is the bundle of flowers/lotus:

And he is also correct that this biliteral (two consonantal character) can just represent the letter H.  However, an even better bullseye than this is the character for ha, which also has visual affinity:

Next, he is also correct that the character he points out looks like the owl character, which is the common M uniliteral of the Egyptian Alphabet.

So, the result of my analysis on Homans' theory is that it is correct.  The character for figure 11 in Facsimile #1 is indeed a rebus for the name of Abraham.  Nevertheless, the question must be asked:  How is this so?  Was it intentional originally from the original person that drew the original to Facsimile #1?  No.  It is something that was concluded after the fact where someone reinterpreted this (i.e. recycled/adapted it in a different document) using the same types of principles that I have pointed out in the rest of this blog:  i.e. entirely through the principles of visual affinity (visual punning) and re-appropriation of symbols that didn't start out this way.  I say, once again, that this originated as coincidence, and later, the symbols in this picture were appropriated to be used for Abraham.  And the visual coincidence of these characters made them serviceable to be used as a rebus for the name of Abraham.  Therefore, these are decorations that were reused in the original ancient Book of Abraham manuscript, and they were lifted from the Hor papyrus.  They were used as puns, and reinterpreted from their original context.

Historically, people that read Homans' theory (and perhaps even Homans himself) probably thought that the original creator of this papyrus intentionally spelled out the name "Abraham" with these characters.  No.  Rather, they were re-appropriated after the fact like the rest of the symbols/symbology in the papyrus for this purpose.  And, interestingly, together, these symbols make a sort of "ligature" where they are tied together, and in order to come to this conclusion, someone basically has to "dissect" the symbols apart from each other, visually, which follows yet another principle that I discussed a while ago on this blog: