A paper appeared on Academia.edu by Hind Salah-Eldin, a Faculty Member at Cairo University in the Department of Egyptology.  The paper is entitled "A New Light on Coptic Cryptography."  The paper shows a picture of an ostracon, that demonstrates a system of cryptography, where certain Coptic letters are substituted for others.  For those that are unaware, Coptic is the late Egyptian language.  The ostracon is dated by being associated with a group of monks that lived in an area of Egypt at "the end of the sixth century and the beginning of the seventh century."  Salah-Eldin writes:

This ostracon is important for the study of the Coptic Cryptography because it contains a clear evidence for what we can call ‘A Key’ for the scribe rendered the original letter over its cryptographical equivalent. As far as I know, this ostraca is unique, for only about thirty published examples of Coptic cryptography texts have been recorded until now as had been mentioned above, and no one of them holds this ‘Key’ by this form, but further studies and publications in this field will reveal other texts like this ‘Key’ because this type of text served as an exercise by the writer to himself or to someone in order to memorize the alphabets in their Crypto-graphical form.


And here is the picture of the Key on the ostracon, showing the characters and their assigned values: 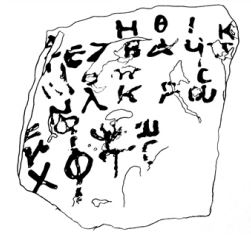 As you can see, though this is not the ancient Egyptian language, it is still an Egyptian language, and here is a key to a "cryptographic" system, where symbols in an alphabet are assigned to take the place of other characters in it.  This is very significant showing the ancientness of the concepts of assigning values to characters, and the requirement for this kind of a thing as a dependency in order to make any sense of something.  And it is significant that this is from Egypt, showing the possibility that this concept may have been passed down from more ancient times.