Here is a web archive copy of this article:

This post was pointed out to me by someone on a message board.
I don't recommend this post as being very correct, although it has some good points.
It points out that we should expect that in some of Joseph Smith's Egyptian, there would be internal consistency.  That is true.  Consistency can be demonstrated.

However, this author's other deductions are incorrect, that he can just "translate" something using the internal consistency that he can see in some of it.  The reason that this cannot be done is because of other principles that I have pointed out in this blog in other blog posts.  The abstract nature of the pictographs in the Sensen text and in the Facsimiles pictures are things that match up with their explanations.  In other words, there is consistency between the explanations and the symbols that are used to represent them.  But the problem is, the abstractions are ENTIRELY dependent on these outside things giving them context.  They have external dependencies, and so, in themselves, they are meaningless.

It's like the hash analogy in computer programming.  It is a one-way thing.  If you have information already that a hash is derived from, you can show that the hash fits with the item of information.  However, you cannot go the other way.  You cannot reconstruct information from a hash.

Similarly, you cannot take these symbols as pictographs and reliably translate the rest of the Book of Abraham from them.  You must have that information revealed to you, although the symbols do indeed represent it.  Because just because you have symbols, that doesn't help you.  The symbols do not contain data, only fingerprints of data.

This is my fundamental criticism of this blog post on the Zomarah blog.  Patterns can be shown, but it cannot be translated the way he says.  Since context is dependent on external information, and we don't have further external information, we cannot duplicate what Joseph Smith was doing.  We can only test what he has already done.  It would require another seer to do the same type of thing that Joseph Smith was doing through revelation.

I wanted to make note here that I believe that the Egyptian Priest-Syncretists of the Greek Magical Papyri tradition have some connection to the same system of the iconotropy manifested in characters in derived lists of things taken originally from the Sensen Papyrus.  In other words, the KEP contains a derived list of arbitrary characters that has nothing to do with the context from which it was derived.

I believe the people of the era transformed the already-existing symbols of the Sensen Papyrus into something that could be called a pictographic Book of Abraham.  It isn't literally the Book of Abraham.  It is a list of symbols that can stand for elements in it by iconotropic assignment
So, they may have chosen the figure of Osiris to represent Abraham.  And a strange coincidence with that fact is the occurrence of the name Abraxas in the Gnostic/Syncretist traditions of the Greco-Roman time period (the same time period of the Greek Magical Papyri and the Sensen Papyrus), a name that has a similarity or likeness to Abraham.  A variant of this name/word was Abrasax, which is kind of an anagram of the name.  Here is the Wikipedia article on the god Abraxas (and of course, the word was also used as a magical or key word in the Syncretist religion of these priests):

One source exists called Collectanea de Rebus Hibernicis (edited by Charles Vallencey), a book with speculations on old Irish Astrology and other mysterious odds and ends.  Interestingly, as is pointed out in it, that the Aramaic version of the name is Abrakas.  This is how it has to be spelled in Hebrew/Aramaic letters in order to equal 365 through the numerological principle of Isopsephy (using the numerical equivalents of letters and adding them up) in that Alphabet.  This is because of the differences in letters and values between the Greek alphabet and the Hebrew/Aramaic alphebet.  The book makes the claim that the "Chaldeans" (i.e. Aramaeans) spelled it this way. 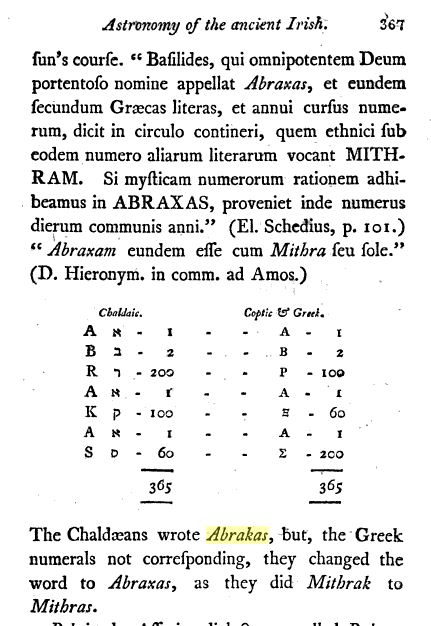 And in fact, in other sources such as the book Aramaic Incantation Texts from Nippur by James Alan Montgomery, on page 148, it backs up this claim, that the name Abraxas in Aramaic is indeed Abrakas.  In an incantation on that page it is translated as:

It is interesting to note that on page 151 of that same book, Montgomery notes that the name is also associated with the name Abbahu.  And it quotes another scholar saying that the deity's "proper name is IAO [i.e a form of the Tetragrammation or YHWH/Yahweh/Jehovah], but his epithets are Abraxas and Sabaoth . . ."  Sabaoth in Hebrew means "Hosts," which is why Yahweh Sabaoth is translated in our scriptures as "Lord of Hosts."  And it notes that the deity is usually accompanied by invocations saying "thou art our Father."  Certainly, that fact would be true for God, as well as for Abraham (both being "father" figures).  But it is natural that Abraham should be linked to a deity because, as the Wikipedia page says above that in the Greek Magical Papyri . . .


The patriarchs are sometimes addressed as deities; for which fact many instances may be adduced. In the group "Iakoubia, Iaosabaoth Adonai Abrasax," the first name seems to be composed of Jacob and Ya.

So, it is unsurprising that Osiris may have been a symbol used for Abraham, because of related facts like these, or related associations.  Perhaps Abraxas could be considered a plausible symbol for Abraham as well.  I believe that these people equated the Gnostic Abraxas (the name which also appears in the Greek Magical Papyri) with the Egyptian Osiris.  For example, as noted in one Greek Magical Papyri, the identification with Osiris is clear:


In text PGM V. 96-172, Abrasax is identified as part of the "true name which has been transmitted to the prophets of Israel" of the "Headless One, who created heaven and earth, who created night and day... Osoronnophris whom none has ever seen... awesome and invisible god with an empty spirit"; the name also includes Iaō and Adōnai. "Osoronnophris" represents Egyptian Wsir Wn-nfr, "Osiris the Perfect Being". Another identification with Osiris is made in PGM VII. 643-51: "you are not wine, but the guts of Osiris, the guts of... Ablanathanalba Akrammachamarei Eee, who has been stationed over necessity, Iakoub Ia Iaō Sabaōth Adōnai Abrasax." (http://en.wikipedia.org/wiki/Abraxas, emphasis added.)

And so, it was only natural that they would look to Abraham as the Hebrew figure that answered to that name (Abrakas) as well, because of a pun or likeness in the name.
Remember that in the Sensen Papyrus, a symbol for Abraham is a rope coil (hieratic), or Egyptian letter W.  A reading for this character in Hebrew that derives from Egyptian, is the Hebrew word "Abrek."  This word is without a doubt connected to the name that John Gee pointed out that is found in the Greek Magical Papyri for Abraham:  Abracam or Abrakam, however you would like to spell it.  So, as you can see, some priests of this tradition spelled Abraham's name with a K sound.  See my article on this:

Now, if you remember, the Greek nominative ending is S.  For example, in Greek, Joseph is Josephus, Jacob (James) is Jacobus (Iacobus), and so forth and so on.  So now, if we have this name of "Abrek" and add a Greek nominative ending to it, it would be Abrekus, virtually identical to  Abrakas.  So it is very clear in my mind why they would have associated Abrakas/Abraxas with Abraham.  And then since Abraxas is a name applied to the high God in Gnosticism and in the Greek Magical Papyri, it is natural that this god would also be associated with Osiris.  So, it isn't very difficult to see the equation for the iconotropy/substitution:

As I pointed out above, like Osiris is linked with Jehovah, in that he is the dying god, Abraxas is also linked with Iao (Jehovah).  In the so-called "Abraxas Gems" or "Abraxas Stones," which are stone talismans with the figure of Abraxas engraved in them, he is depicted as having a rooster head with snakes coming out from below as his feet.  The same exact images were used for Iao in the same types of gemstones/talismans: 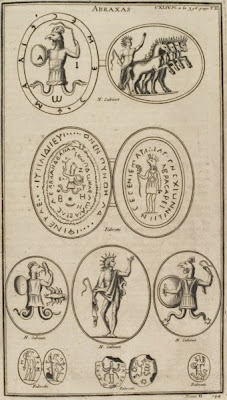 Back in 2013, the Book of Abraham blog did a review of Kerry Muhlstien's article that noted that the Egyptian priests that wrote the so-called "Greek Magical Papyri" were transforming Egyptian figures into Semitic ones, like Osiris into Abraham and so forth and so on.  As I have said again and again in this blog, these are the priests that were into Syncretism, the Syncretists that I believe were responsible for the iconotropy in the Book of Abraham.  Again, the difference between Muhlstien's position and mine has to do with the fact that Muhlstien and other Book of Abraham scholars only believe that the FACSIMILES pictures were transformed in this way.  I say that all the figures, even the so-called text or alphabetic characters were transformed as well into little pictures and used pictographically.

Here is the review of Muhlstien's work on that blog:

And here is the link to Muhlstien's article:

The second is the Ancient Context manifest in the "Egyptian Counting" sections of the KEP where the linguistic analysis of these numerals and their vocalizations manifest this weird Himalayan/Indian geographic connection where the Indo-Iranian and Sino-Tibetan language families overlap (because the numerals are of the Indo-Arabic family, and the vocalizations are a mix of Indo-Iranian and Sino-Tibetan).  What are we to make of this?  Did the Egyptian Syncretist Priests of the Greek Magical Papyri tradition have dealings with ancient Gurus in the Himalayas because of Silk Road ties?

The third is the Ancient Context of the Book of Abraham, which actually goes back to the time of Abraham.