This is the image from the Kirtland Egyptian Papers/Egyptian Alphabet and Grammar for the vocalization Veh-Kli-Flos-Is-Es:

This is the image of the character from the Sensen Papyrus:

Here is the location of the glyph on the Hor Sensen Papyrus (encircled in red): 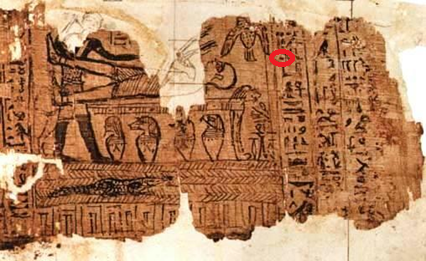 Michael Rhodes has identified this as the Egyptian symbol/uniliteral T, which various authorities have interpreted as a bread loaf:

In Gardiner's sign list, this is given the designation of X1.  It is listed as being the "major determiner of 'feminine' or 'female, woman'." (http://en.wikipedia.org/wiki/List_of_hieroglyphs/X)

This is the mythological god Thoth (Djehuty).  As you can see, he has the head of an ibis bird.  You will no doubt notice the visual affinity with the head of the ibis bird in the picture of Thoth above and the bread loaf glyph shape.  The curve is immediately apparent.  We read:

Interesting is the cryptic reproduction of the name of Thoth with the hieroglyphic sign for bread, to be read t3 or t. The same sign can be found in the old style of writing thn, meaning 'ibis.'  If this sign is not an ordinary abbreviation, it could be the indication of the participum activum of the verb tj, meaning 'to crush'.  Thoth would thus be characterised as 'the crusher', the crusher of Seth and other foes.  Thoth is, indeed, the great combatant and destroyer of his opponents.  On this point, K. Sethe remarks that this cryptic style of writing is not unique.  Parallels are Hr, meaning 'the far one' for Horus, and Wd emaning 'the condemned' for Seth. (Hathor and Thoth: Two Key Figures of the Ancient Egyptian Religion, by Claas Jouco Bleeker, p. 107).

Thoth, of course, was identified with the ibis.  Similarly, the Hebrew word for bread is lechem (Strongs 3899), which is derived from lacham (Strongs 3898), meaning to feed on, to consume, to battle, to destroy.

It would seem, once again, we have yet again a mythological god that has been identified with a uniliteral glyph through acrophony.  And it is interesting that the Semitic lechem or lacham (LKhM) starts with L and has an M in it like Limdi.
Ibis in Hebrew is maglan, a wordplay/letterplay/anagram on these roots (MGLN), where the M and L are transposed, and the G is a hard sound like the Kh (https://en.wikipedia.org/wiki/Maglan).  The word may be related to magal, a sickle (Strongs 4038), which historically would have the same shape as the beak of the Ibis, and could be considered a weapon.  In Arabic, a sickle is munagil (munajil), and an ibis is an 'abu munajil.

Thoth is the scholar god "popularly depicted as an ibis-headed man while consumed in the act of writing." (http://en.wikipedia.org/wiki/Ibis).  He is known as the secretary of Re, "He is responsible for writing, mathematics, measurement and time as well as the moon and magic." (ibid.)  Remember, Veh-Kli-Flos-Is-Es (Limdi) and Kli-Flos-Is-Es have to do with the measurement of time, according to Joseph Smith.  Indeed, in the Hebrew, the root lamad means to goad, to teach, etc. (Strongs 3925).  Limmud (Strongs 3928), which derives from lamad means instructed, as being a disciple, learned, taught, and so forth.  This is clearly the root from which the name Limdi is derived, which is a clear association with the theme of Thoth/Hermes.  Limdi is clearly a word of Semitic derivation in the Egyptian Alphabet and Grammar, answering to an Egyptian symbol carrying that same theme as its root meaning.  Lacham would seem to have an association with the root lamad.  Of course, the Hebrew letter lamed is a picture of an ox goad, according to some authorities.  It is also a character with a curve like the Egyptian T, and it appears one may ask the question question whether it derives from character V1 on Gardiner's sign list (a rope coil) as some people believe.  Or whether it actually derives from the Egyptian T uniliteral/bread loaf glyph (X1 on Gardiner's list).  Or perhaps it has a relation to both.  Here is the Proto-Sinaitic lamed, from whence our letter L derives:

Anyhow, back to Veh-Kli-Flos-Is-Es and Limdi.  Remember Veh is Five in the Egyptian Alphabet and Grammar, and Limdi is the fifth fixed star.  Thoth's association with the number five is interesting:

This mythology also credits him [thoth] with the creation of the 365 day calendar. Originally, according to the myth, the year was only 360 days long and Nut was sterile during these days, unable to bear children. Thoth gambled with the Moon for 1/72nd of its light (360/72 = 5), or 5 days, and won.  During these 5 days, Nut gave birth to Kheru-ur (Horus the Elder, Face of Heaven), Osiris, Set, Isis, and Nephthys. (http://en.wikipedia.org/wiki/Thoth)