The Egyptian KH Uniliteral, the god Khepri and Joseph Smith's Flos-is-es: Degrees of Light, the Sun or King of Day

Here is the location of the character on the Sensen Papyrus (encircled in red): 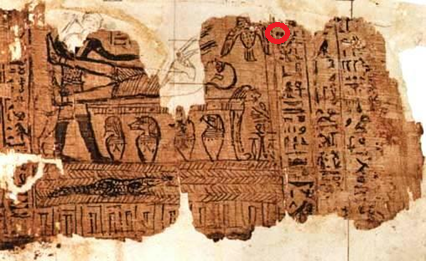 In the Egyptian Alphabet and Grammar, this is the round character that Joseph Smith identified as Flos-is-es.  Michael Rhodes identifies it as the Egyptian character for the Kh vocalization (uniliteral) in the name Taykheybt, the mother of Hor, the owner of the Sensen Papyrus. In Gardiner's sign list, it is given the designation of AA1. [i]

There has always been lots of controversy on the meaning of this glyph.  Some authorities have argued that it represents either a placenta or a circular sieve/sifter [ii].  The point is, among the authorities, there isn't a lot of agreement, and even when they suggest a meaning for it, they sometimes put a "?" or question mark after their suggestion.

Throughout the five "degrees" of the Egyptian Alphabet and Grammar, this glyph (Flos-is-es) is said to be either the "highest" degree of light, the "right" degree of light, or "King of Day" or the "central moving planet" from which others get their light, or the "Sun."

Others have made proposals that this glyph seems to have something to do with the Sun or the horizon.  One argument that has been made has to do with the use of the glyph in Khufu's cartouche [iii].  Others have argued against this, and it is unlikely that Egyptologists will take those theories seriously.

And even if it is linked to the Sun, which in my estimation, is very likely, it doesn't make the interpretations of "sieve" or "placenta" wrong, just an interpretation in a different context.  Various other glyphs of the Sun in Egyptian are circle-glyphs.  In this case, it is especially interesting however, that there are a number of lines going through the glyph.  Remember that Joseph Smith said that the "sign of the degrees" was a horizontal line.  It is possible that these horizontal lines represent the varying degrees of light.  They could also represent shading, or even clouds in the sky.

Khepri was connected with the scarab beetle (kheprer), because the scarab rolls balls of dung across the ground, an act that the Egyptians saw as a symbol of the forces that move the sun across the sky. Khepri was thus a solar deity. Young dung beetles, having been laid as eggs within the dung ball, emerge from it fully formed. Therefore, Khepri also represented creation and rebirth, and he was specifically connected with the rising sun and the mythical creation of the world. The Egyptians connected his name with the Egyptian language verb kheper, meaning "develop" or "come into being" . . .


There was no cult devoted to Khepri, and he was largely subordinate to the greater sun god Ra. Often, Khepri and another solar deity, Atum, were seen as aspects of Ra: Khepri was the morning sun, Ra was the midday sun, and Atum was the sun in the evening. [iv]

It makes sense that this glyph would represent the morning sun, because the Sun appears over the eastern horizon in the morning.  This is the embodiment of the Egyptian word khepher, as we saw in the quote above, because the sunrise in the east is the renewal of the sun.