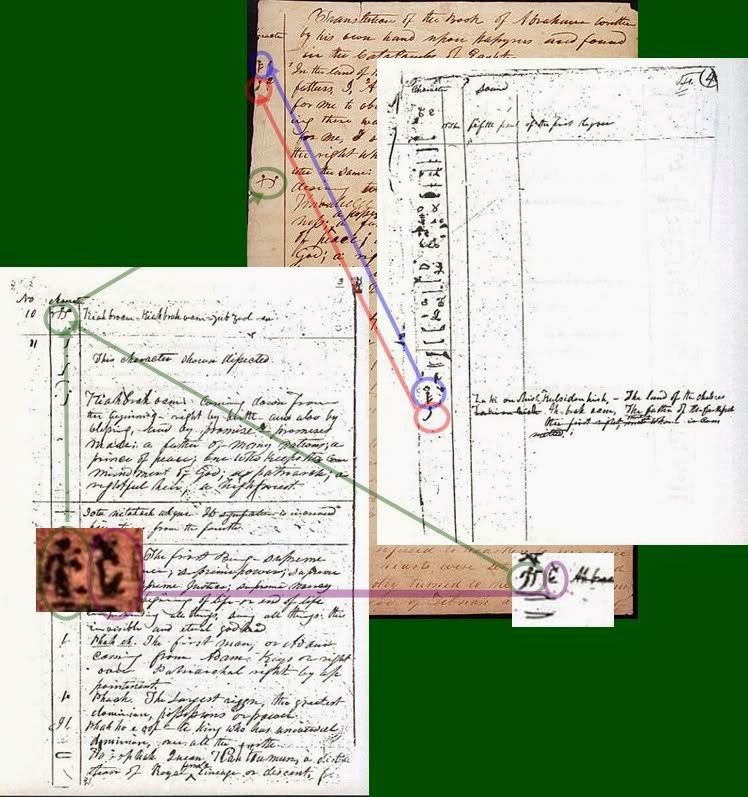 Even though this was originally taken from the columns, the copy of it in the Book of Abraham Manuscript margin above, as you can see, it is the third character down.  In other words, this was one of the characters Joseph Smith was using to fill in the lacuna.  Chris Smith prepared a graphic here, where he put them in order that they appear in the Book of Abraham Manuscript: 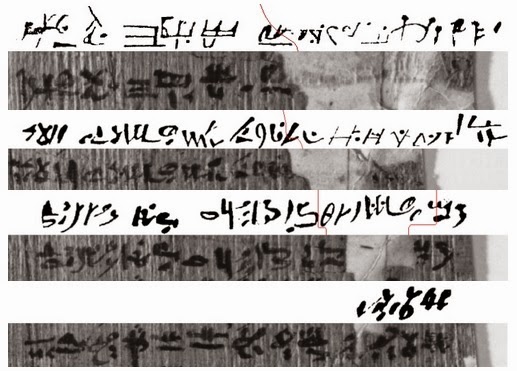 As you can see, the first one going from right to left on the top line here is the W or Reed character.  Next is the comma-looking W or Rope coil character.  And then, this character appears as the third character in the order Joseph Smith put them in.  But as I said, this is originally one of the characters in the Sensen Papyrus in the columns surrounding Facsimile #1.

As is shown in this post, Ed Ashment identified it:

It is Usiwer (Wsir-wr), the name of the father of Hor, the owner of the papyrus: 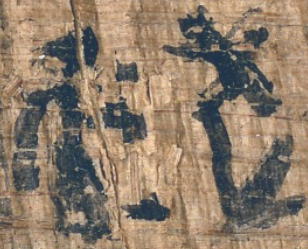 Here is the drawing of the character from the Egyptian Alphabet and Grammar: 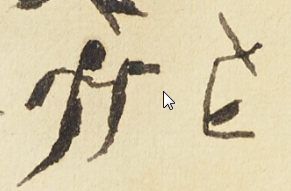 Here is the location of the figure on the Sensen Papyrus (encircled in red): 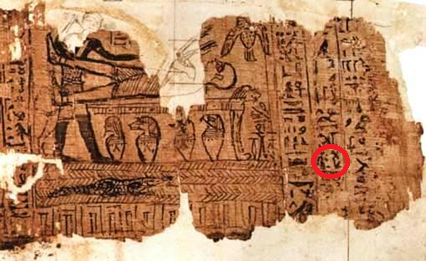 Wsir-Wr means "Osiris the Great."  Joseph Smith translated this as "Ki-Abra-oam-Zub-Zool-Oan."  It was one of the compound characters that he dissected into pieces, and translated each piece, as I described previously in previous blog posts, like for example the Wedjat Eye that is dissected into its pieces, and where each piece is a separate fraction mathematically.  This character shows once again that Joseph Smith has correctly identified this as the name of the person on the Lion Couch, which is Osiris, since he identifies it as Abraham, and its dissections as being how Abraham describes himself in Abraham 1:2-3.  Joseph Smith "plugged in" the identification of Abraham, using Osiris as the symbol for him, according to the intent of the ancient interpreters.  Once again, Joseph Smith scores 100% on the identification of this symbol.  Joseph Smith translated the various sections of this character in the Egyptian Alphabet and Grammar as this, which now appears in Abraham 1:23:

". . . having been myself a follower of righteousness, desiring also to be one who possessed great knowledge, and to be a greater follower of righteousness, and to possess a greater knowledge, and to be a father of many nations, a prince of peace, and desiring to receive instructions, and to keep the commandments of God, I became a rightful heir, a High Priest, holding the right belonging to the fathers. It was conferred upon me from the fathers; it came down from the fathers, from the beginning of time, yea, even from the beginning, or before the foundation of the earth, down to the present time, even the right of the firstborn, or the first man, who is Adam, or first father, through the fathers unto me."

Chris Smith demonstrated the dependence of these verses on the translations in the Egyptian Alphabet and Grammar for this character.

As Ed Ashment showed, in the Egyptian Alphabet, the hieratic W (the symbol that looks like a comma), signifying Abraham, was seen as a component part of this character.  The left part of the Wsir-Wr character that was drawn this way: 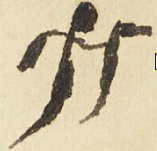 Was also drawn this way (a little exaggerated, perhaps to show its component pieces better): 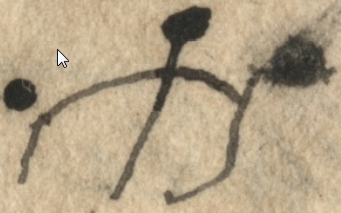 And it was dissected this way, after the same manner as the Wedjat eye is dissected, as we had discussed in a previous post:

Until finally, we have the hieratic W, which was represented as the right-most portion of the Wsir-Wr character.: 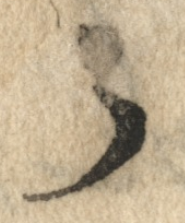 My friend Ryan Larsen has posted this article:
https://meditationsandmeaning.blogspot.com/2020/05/meditations-on-vogel.html

I can't agree on many points in the article, especially that the author leaves open the possibility that W. W. Phelps was significantly responsible as mastermind for some of the contents of the Kirtland Egyptian Papers.  This is a popular but absolutely 100% false theory among apologists trying to distance Joseph Smith from the translations in the Kirtland Egyptian Papers, because they want to leave open the possibility of mere "speculation" in some of the translations, so that they don't have to defend them, and can quickly and summarily dispose of them.

However, Ryan does point out Ed Ashment's hieroglyphic transcription of the hieratic Wsir-Wr symbols from the Hor papyrus.  Here is how Ed Ashment transcribed it:

Also, if you look at Michael Rhode's hieroglyphic transcription in his book on the Hor Papyrus, similarly, he transcribes it this way:

Ryan identified the hunched-over old man on the left as Gardiner's sign list symbol A19, and this identification is correct.  This is one of the hieroglyphs that means "great" in Egyptian.  In many cases it is vocalized as WR.  Similarly, another Hieroglyph in question for "great" (WR) is the swallow hieroglyph (Gardiners G36):

The vocalization, as we have seen for both is the same, with the pretty-much same meaning, so they are interchangeable, it seems.

Some have pointed out that WR as "great" corresponds to the Sumerian word for great, which is GAL.

Ryan gets it right that the "great" in the name Wsir-Wr, is clearly the element in ancient Egyptian that is the direct parallel to what Joseph Smith produced in the translation for Wsir-Wr, showing successive progression in greatness in this and that.  For example, Abraham 1:2 says that Abraham sought for greater knowledge even though he already had great knowledge, and to not just be a greater follower of righteousness than he had been.

Another friend, Vincent Coon, points out that the old man hunched over meaning "great," also means chief, eldest, etc.  And as he terms it, "ancient of days."  Indeed, in the Book of Abraham, Abraham says that the priesthood came down from the fathers, from Adam in Abraham 1:3, which seems to be a parallel to the "ancient of days" in the concept of WR.

Now, above, besides the hieroglyph for great, as the hunched over old man with the cane, we also see the hireoglyphic for the seated god Osiris (Wsir).  There is no number for this in Gardiner's sign list, but other signs for gods appear in section C of the list.  But we can be sure that it is indeed a picture of Osiris.  But now, let us discuss a bit more about the hieroglyphs for the name Osiris.

Now, looking up the regular way for spelling out the name Osiris in hieroglyphics, first, we have the particle WS, which is the picture of a throne (Gardiners Q1):

Now, interestingly, the vocalization in Sumerian for throne, ruler, etc. is Sumerian is barag, bara, bar, etc. (https://www.sumerian.org/sumerian.pdf).  As we showed in other posts, other symbols in the Kirtland Egyptian Papers like the W symbol (rope-coil hieroglyph in hieratic, quail hieroglyph in hieroglyphic) (which looks like a comma), can be associated with the words Abrek and Barak, both meaning to bow, to curl, etc.  In   This is why the W symbol is associated with Abraham.  In this case (the case of the throne hieroglyph), it is the Sumerian pronunciation of the throne that is the most interesting:  Barag.  It is yet another word play with the name Abraham.  Barag also means nest, which is an interesting coincidence for the quail hieroglyphic.

Then secondly, we have the particle IR, IRI or IR.T, which is the picture of an eye (Gardiners D4):

Therefore, Osiris the Great, is Abraham who successively is greater in various ways as he progresses.  This is why the symbol for Osiris is associated with Abraham in the Hor Papyrus.

The other word for eye here in Akkadian/Assyrian (Semitic Languages from the area of Sumer) is Inu.  This may explain the particle OAN, in Zub Zool Oan.  It is a cognate of the Hebrew Ayin, meaning eye.