Joseph Smith's Ja-Oh-Eh, the Egyptian Niwt and Semitic Teth: The Earth in its Four Quarters

To the left is the character assigned to Jah-Oh-Eh ("the earth") in Joseph Smith's Egyptian Alphabet and Grammar.  To the right is the one from Facsimile #2 of the Book of Abraham that is assigned the value of  "the earth in its four quarters."  As you can see, they are the four canopic jars, the same as in Facsimile #1, that are the Four Sons of Horus.  Of course, apologists have long touted Joseph Smith's 100% bullseye with the Four Sons of Horus as the earth.  But, they intentionally have long neglected the other part of the bullseye of Jah Oh Eh in the Egyptian Alphabet and Grammar, pretending like it didn't exist.  They didn't notice or left out the fact that this has a direct connection with the Four Sons of Horus in the Hypocephalus and in the Lion Couch scene.

After careful comparison of the characters before and after this character in the Egyptian
Alphabet, and of where these other characters appear in the columns in the Sensen Papyrus, there does not seem to be an equivalent to this character in the columns in the Sensen Papyrus.  Therefore, it seems that this is one of the characters that Joseph Smith restored to the Egyptian Alphabet or reconstructed from inspiration.  Anyhow, as you can see, the one from the Egyptian Alphabet it is indeed a circle with four quarters.  Of this symbol, we read:

A sun cross or wheel cross, a cross inside a circle, is frequently found in the symbolism of prehistoric cultures, particularly during the Neolithic to Bronze Age periods. The actual significance of these symbols in the prehistoric period is not known, but from their ubiquity and apparent importance the symbols have been adopted in various schools of Neopaganism, esotericism and occultism.Currently, the same symbol is recognized in astronomy as a representation of the Earth, but not the Sun, which is recognized by a "point-in-circle" symbol . . .
In astronomy, the same symbol is used to represent the Earth, rather than the Sun. It is used and recognized officially by various professional scientific organizations, such as NASA, and the United States Naval Observatory (USNO). (http://en.wikipedia.org/wiki/Sun_cross)


Now, as for the meaning of this symbol in astronomy in particular, it is said to represent the "Globe with equator and a meridian" (http://en.wikipedia.org/wiki/Astronomical_symbols).  Also: "The symbol for Earth shows a globe bisected by meridian lines into four quarters."(http://solarsystem.nasa.gov/multimedia/display.cfm?IM_ID=167).  Another article states:

The most common and widely accepted interpretation of the symbol for planet Earth is that it represents the globe and the four direction on a compass. This version of its meaning is acceptable to all because of its neutrality and lack of religious connotations . . .
In Norse mythology, the same symbol is used to represent Odin, the main god in the Norse pantheon. In that light, the symbol is sometimes referred to as Odin’s Cross or the Solar Cross. The same symbol is used to represent the State and Church of England under the security of the crown and is symbolized by the Sovereign’s Orb. John Dalton, a pioneer in atomic theory, used the symbol to represent sulfur on his elements chart. The current symbol for the Earth has been referred to as the wheel cross, the sun cross, and Woden’s cross as well. (http://www.universetoday.com/14512/the-symbol-for-planet-earth/)


It is well documented that the circle-cross is a symbol among Native Americans for "earth" referring to the "four winds" which has reference to directions.  Also, for the Egyptians, "A sign resembling a circle and a cross was the determinative for names of towns or countries"  (Decoding Egyptian Hieroglyphs: How to Read the Secret Language of the Pharaohs, By Bridget McDermott, p. 25).  In other words, this circle with a cross in it was the symbol in Egyptian that would cue the reader to understand that the name it was used in stood for either a town or country or land.  Earth in Hebrew is "erets," also meaning land.

. . . the Egyptian hieroglyph niwt (pronounced ‘nee-oot’). Niwt is used as a determinitive so that, for example, if written with a pictogram of a falcon (Horus) the combination of symbols  means ‘the city of Horus’ (which the Greeks called Hierakonpolis).
Most heiroglyphs began as pictograms and many people think that this must be true of the niwt symbol. It is read as a protective wall round a settlement with crossing roads within. But it is also known that niwt was used for small towns before it was used for large towns, and it could therefore have meant a house-and-garden before it meant a town. My own reading of the symbol is that it reflects two very ancient and fundamental truths about dwelling places:-they must provide safety and security-they must be connected to the world outside the dwelling placeIF this is correct, then the niwt hieroglyph can be read is the world’s most ancient ‘plan’ of a dwelling place, representing a linkage between indoor and outdoor space . . .  (http://www.gardenvisit.com/blog/2009/09/19/niwt-symbol-ancient-egyptian-city-determinative-hieroglyph/) 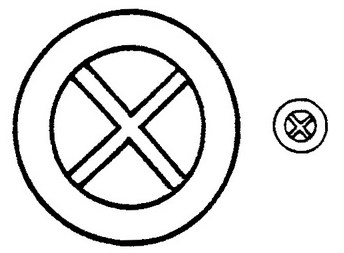 The expression ‘the Four Corners of the Earth’ can be traced back to the Egyptian mythology and pointed to the world-as-a-house. The Egyptian sign for a city (‘niwt’) was a circle divided in four parts and one of the oldest known hieroglyphs, dating from the pre-dynastic period (fig. 508). The hieroglyph is derived from the graphic renderings of walled enclosure, which were depicted on flattened stones (palettes) found near Abydos in Upper Egypt and dating from the end of the fourth millennium BC . . .
The niwt sign had a wide application, which included all types of imaginary or real places. This apparent ambiguity might point to a type of higher division thinking in the Egyptian cultural history. (http://quadralectics.wordpress.com/4-representation/4-1-form/)


The Egyptian Niwt is O49 on Gardiner's sign list.  The vocalization Ja Oh Eh is probably Semitic, but only further research can show us its likely derivation.

Just like the change in orientation over time of the Semitic/Greek Alpha/Aleph, the cranking of Niwt 45 degrees from the orientation of Joseph Smith's Jah Oh Eh is not a material difference.

There seems to be a connection between Jah Oh Eh and the "Four Royal Stars" which are the Guardians of the Four Directions in some Middle Eastern Cultures.  These four royal stars are associated with the Four Sons of Horus also.  They are Aldebaran, Regulus, Antares and Fomalhaut.  These stars point the way to the four directions.  And of course, if we visualize the fact that the sky is like a circle, then it makes sense that these four stars and the sky make up the wagon-wheel-like shape of Teth, Niwit and Ja Oh Eh.

There may be an association with the later Semitic/Phonecian letter Teth, which looks just like JahOhEh/Niwit.  But the Semitic word Teth translates as "wheel."  However, according to some, Teth originated as a character which was a cross to the left side of a circle in the Proto-Canaanite/Proto-Sinaitic, according to some researchers:

It seems its origin may be mixed, because there is a very strong association between  other related characters, visually and etymologically.  Some say it derives from a character meaning "good" in Egyptian, which is pronouced nfr ("nefer") (Gardiner's F35):


Some believe that this is the word that the Book of Mormon name Nephi derives from.  One authority writes that it is . . .

clearly a borrowing of the Egyptian nefer hieroglyph, which stands for goodness and beauty, and Semitic t.ab (good, beautiful) provides the acrophone (in the syllabary and the consonantary: T.A and T.). As this hieroglyph does not readily yield up its meaning (the heart and the windpipe perhaps expressing emotional reaction to goodness) knowledge of the Egyptian symbol would be required. (http://cryptcracker.blogspot.com/2014/09/goldwasser-alphabet.html)

This seems to demonstrate once again, the principle of Visual Affinity, that I have talked about in other parts of this blog, that characters with visual affinity and other types of affinity (etymologically) sometimes are swappable/substitutible.

Here's the interesting thing here.  David Stewart Sr., an LDS Linguistics hobbyist, points out that the word niwt, in his beliefs, was turned around and pronounced like the English word "town."  This is because, he seems to believe that some words/roots can be palindromic (similar to palindromes), where one is spelled the reverse of the other.  Stewart claims that this is a feature of some Ancient languages.  I don't if I would take it that far as a general rule, but yes, to some degree it seems to be so, where some related roots are this way.  While it appears that I may not agree with everything that Stewart produced, it seems that he has hit upon some interesting observations.  If we take this further, we can at least observe that the the derivation/etymology of the English word "town," has very interesting derivations, as also, the Etymologically related English word "down" as in going down a hill.

*dheun-  or *dheuə- is the reconstructed Indo-European root, suggested by some, that seems to denote a hilltop settlement or fortified settlement, or more basically, to "close, finish, come full circle.".  It seems to be cognate to the word niwt: