Indo-Arabic Numeral Characters in the Egyptian Alphabet and Grammar

Now we present various forms of Indo-Arabic scripts for comparison.  First, we have the Indo-Arabic variants in the EAG (Egyptian Alphabet and Grammar) from the KEP (Kirtland Egyptain Papers), which are NOT from the Egyptian Papyrus, but from pure revelation: 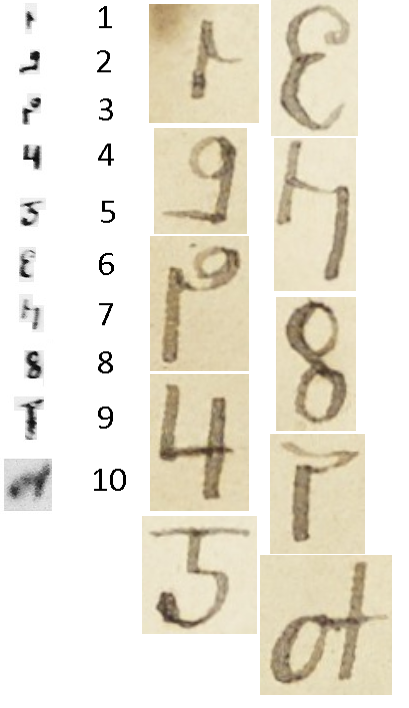 Now I present the Egyptian variants of the numerals.  For some reason, some people do not consider these numerals Indo-Arabic.  But when you actually look at them closely, you can see dramatic resemblances to the Indo-Arabic sets of numerals, as well as with the Egyptian Alphabet And Grammar variants.  Note the similarities of the number six in the EAG to the hieratic variants g and h. The numeral for ten in the EAG is clearly the demotic one cranked in a different orientation.  Note especially, the affinity it has to the variant labelled g.  Note the resemblance of Joseph Smith's 3 to the demotic variants labeled b and c.  The number 9 is identical to almost all variants on this table.  The number 1 is almost identical to the hieratic variant i.  And Joseph's 5 to the hieratic variant g.  And so forth. 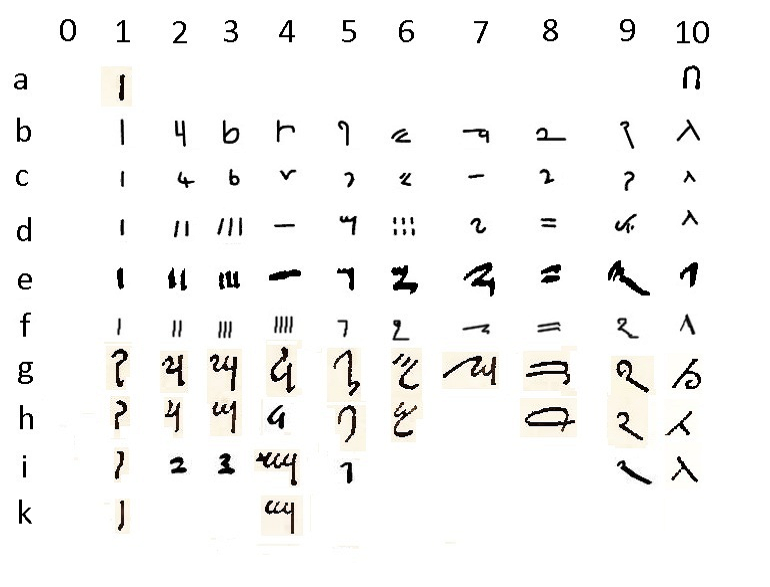 Now we show a table of some of the ancient Indo-Arabic variants, some going back to 500 BC.  Once again, many similarities to the EAG numerals are at once evident, as well as to the demotic in particular.  Here are the Indic variants: 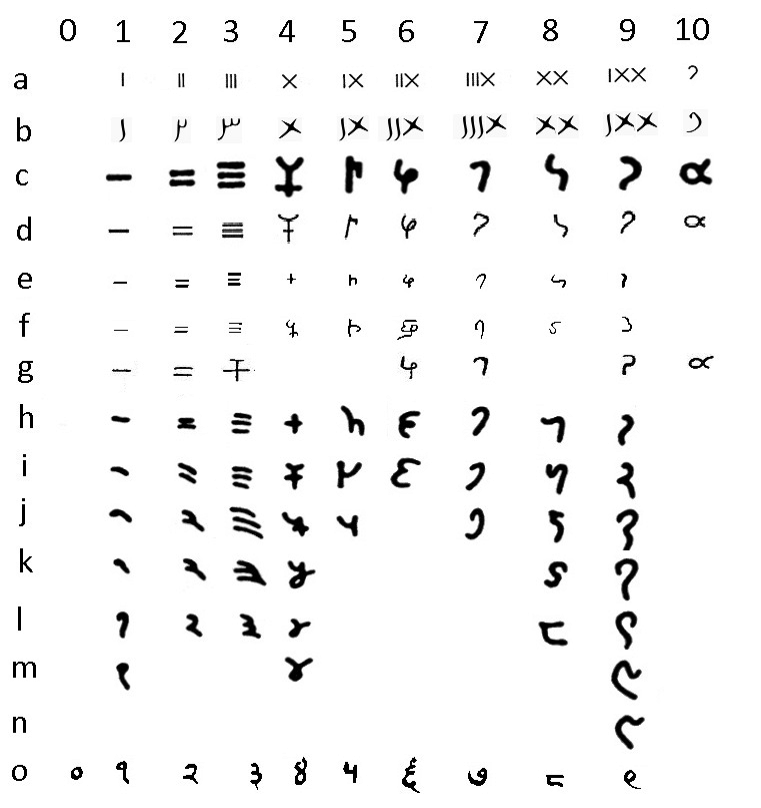 Note that the number zero only shows up in the later variants.  This is because the number zero was not invented until the 9th Century AD in India.  This point is of particular importance, because in the Egyptian Alphabet and Grammar, we have numerals for 1 through 10, but no numeral for zero.  That is a significant point in favor of Joseph Smith's revelatory ability.  He simply would not have thought of that detail.  Study these charts carefully, and you will see that it is plain that Joseph Smith was producing something ancient here, because almost all aspects of Joseph Smith's Egyptian Counting numerals are present in the various Indo-Arabic and Hieratic variants.

Now, what about the proposition that the Brahmi numerals, some of the oldest in India, are derived from EGYPTIAN?  Isn’t it strange enough that these numerals have the name of Brahmi, which sounds so much like the name Abraham?  Georges Ifrah is an independent scholar on the history and development of numbers, who wrote an extremely comprehensive book which was translated from the French into English.  He, takes this theory very seriously, and seems to consider it a viable option among some others:

Buhler (1896) and A. C. Burnell (1878) believed that the Indians owed their Brahmi writing to Pharaonic Egypt.  Buhler claimed that it derived from hieratic writing . . ., and Burnell believed that Brahmi writing derived from demotic writing.Buhler’s theory is not totally unfounded, because there is a much stronger similarity between Brahmi writing and Egyptian hieratic writing than there is between the former and the demotic writing of the same civilization.  However, is this partial resemblance significant enough to suggest that Egypt had such an influence on India’s distant past?
Arabia . . . was a staging post for Egyptian trade . . .  It is possible that these same merchant ships, in their quest  for eastern goods, travelled further than Arabia, not only to the areas around the Persian Gulf, but also as far as the mouth of the Indus . . .
Conversely, during Alexander the Great’s time, India communicated . . . by river navigation . . . [and] overland routes . . . giving access to ports on the western Coast of India.  Commercial relations became more and more firmly established between Egypt and India . . .
(It must be remembered that hieratic numerals were almost obsolete in Egypt by the eighth century BCE; therefore, if this system was transmitted to India, the transmission cannot have taken place any later than this time. As we possess no information about India at this time, this hypothesis cannot be proved.)[i]

Ifrah’s favorite hypothesis about the origins of the Brahmi and Hieratic systems are that they emerged separately and independently, and that they emerged from “identical paths to arrive at similar, if not identical results.”  He says that he believes that that hypothesis is “much more plausible” and is basically something that he “already proved.”[ii]  However, like any other hypothesis, his claim that he has already proven it goes beyond the evidence.  It is his statement based on the confidence that he has in his own argumentation, which is based on his bias toward his own favored explanation.  It is enough to note that he considers the Egyptian origin theory something that is not “totally unfounded.”

It is enough for our purposes to have shown in this study the likelihood of the emergence of the Indo-Arabic family of numerals from Hieratic, or for there to have been a parent system to both Hieratic and Brahmi, and that it is no stretch at all for the plausibility that Joseph Smith received an ancient version belonging to the family of those numerals by the Spirit that were used in his “Egyptian Counting” section of the Egyptian Alphabet and Grammar.