The Phaistos Disk: Possibly an Ancient Syllabary or Abecedarium Connected with the Egyptian Games of Senet and Mehen

As I had noted in earlier posts just in the last few weeks, the Egyptian Alphabet and the Facsimiles of the Book of Abraham may be intimately linked with the games of Senet and Mehen from Ancient Egypt, and that in them, some authorities have sensed calendrical significance.  Then tonight I happened upon this serendipitously:

In Knossos, an alabaster lid with the name of the Hyksos king Khyan has been found. The enigmatic Phaistos Disc, found in the palace of Phaistos on Crete, might also be linked with the Egyptian game of Senet and Snake Game. H. Peter Aleff argues that the depictions are not a script, but are related to the signs of the board game. Senet was a popular pastime in ancient Egypt from late pre-dynastic times on and is well documented because it became an important part of the funerary magic and then evolved into today’s Backgammon.

Its pieces simulated the passage of the player through life and, even more importantly, through death and its perils. The oldest surviving copy of any known board game is the Snake Game. It helped at least one king in the Old Kingdom Pyramid Texts to ascend to heaven and so seems to have represented the same journey, except that its path was not folded, as in Senet, but coiled into the spiral of a snake’s rolled-up body. On one of its sculpted stone boards, the tail of the snake ended in the head of a goose. (http://aratta.wordpress.com/category/egypt/)

Here is a picture of the Phaistos Disc, that you can compare with a Mehen board: 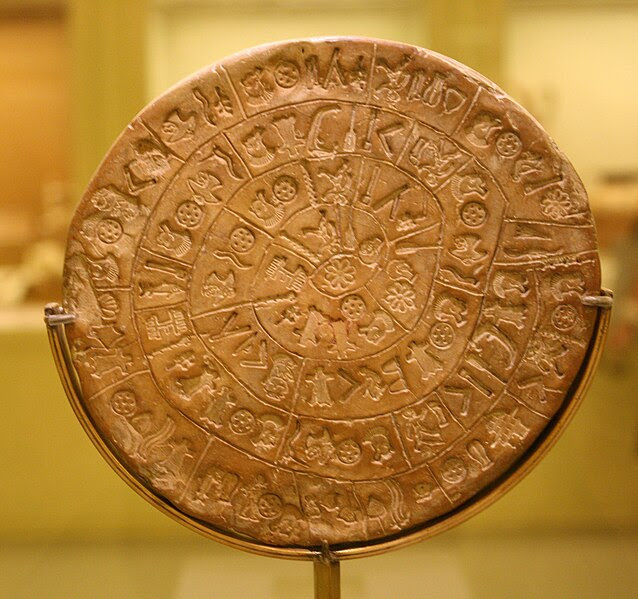 Wikipedia has this to say:


The disc was discovered in 1908 by the Italian archaeologist Luigi Pernier in the Minoan palace-site of Phaistos, and features 241 tokens, comprising 45 unique signs, which were apparently made by pressing hieroglyphic "seals" into a disc of soft clay, in a clockwise sequence spiraling toward the disc's center.

The Phaistos Disc captured the imagination of amateur and professional archeologists, and many attempts have been made to decipher the code behind the disc's signs. While it is not clear that it is a script, most attempted decipherments assume that it is; most additionally assume a syllabary, others an alphabet or logography. Attempts at decipherment are generally thought to be unlikely to succeed unless more examples of the signs are found, as it is generally agreed that there is not enough context available for a meaningful analysis. (http://en.wikipedia.org/wiki/Phaistos_Disc)

While it is true that a minority of scholars believe that it is a hoax (fraudulent artifact), if it is some sort of syllabary of abecedarium, it is not necessarily going to have a "translation" or message attached.  All that can be done is for explanations to be made for it.