So, here is the character that Joseph Smith assigned an H sound from the Hor Sensen Papyrus: 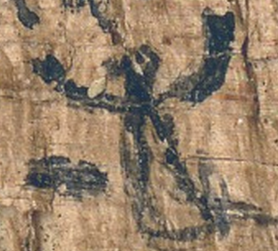 In the Egyptian Alphabet and Grammar, Joseph Smith called this character HoHaOop.  the following is the location of this character on the Sensen Papyrus (encircled in red): 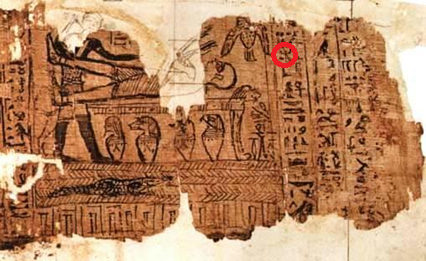 Now, in the Proto-Sinaitic, there is this character:

Of course, in their translation as "hurrah", they mean an exclamation to express joy or approval.  Others have expressed it as a "man calling" and have given it the name "ho" rather than "haw."  (http://www.apocalypse2008-2015.com/Proto-Sinaitic_Hebrew.html).  How interesting that:

There have been two major discoveries of inscriptions that may be in the Proto-Sinaitic script, the first in the winter of 1904–1905 in Sinai by Hilda and Flinders Petrie, dated to circa 1700-1400 BCE, and more recently in 1999 in Middle Egypt by John and Deborah Darnell, dated to the 18th century BCE.(http://en.wikipedia.org/wiki/Proto-Sinaitic_script)

Joseph Smith translated HoHaOop as "An Intercessor, one who has been appointed to intercede for another; invocation."  Of course, everybody knows that hands upraised can mean an invocation, or prayer, or worship, or one who invokes or vocalizes something to God.  Why then did Joseph Smith add the Ha Oop to the name of his character?  Because this is the principle of Acrophony:

Acrophony (/əˈkrɒfəni/; Greek: ἄκρος akros uppermost + φωνή phone sound) is the naming of letters of an alphabetic writing system so that a letter's name begins with the letter itself. For example, Greek letter names are acrophonic: the names of the letters α, β, γ, δ, are spelled with the respective letters: αλφα (alpha), βήτα (beta), γάμμα (gamma), δέλτα (delta). . . .

Modern radiotelephony and aviation uses spelling alphabets (the best-known of which is the NATO Phonetic Alphabet, which begins with Alpha, Bravo, Charlie, Delta...) in which the letters of the English alphabet are arbitrarily assigned words and names in an acrophonic manner to avoid misunderstanding. (http://en.wikipedia.org/wiki/Acrophony)

So, just as modern convention has the B as Bravo, Joseph Smith revealed that Ancient Egyptians or Semites involved with the Sensen tradition chose the Semitic Acrophone HoHaOop to represent the character with the hands upraised.  Nobody knew until a long time after Joseph Smith that the Proto-Sinaitic alphabet would have a cognate to Joseph Smith's HoHaOop.  Of course, it has both particles, Ho and Hah in it.  More research will show plausible Semitic or other roots from whence the word comes.

Tentatively, we can suggest a relation to Ho (Strongs Hebrew 1930) meaning "alas", Hah (Strongs Hebrew 1929) meaning "ah!", or an expression of grief.  And these both derive from the root 'Ahahh ['HH] (Strongs Hebrew 162), an primitive word which is an expression of pain.  Then there is the root ka'ab [K'B] (Strongs Hebrew 3510), meaning to feel pain or to grieve.  If it has anything to do with these roots, it is about the type of invocation where one is praying for help, perhaps.  Or, of course, someone begging for mercy for another person, as in the sense that Joseph Smith was translating it, as making intercession or atonement in someone's behalf. (Isaiah 53:12)

The from Greek, there is:


"Opa" is a Greek interjection used to express joy or high spirits, especially when dancing. (http://en.wikipedia.org/wiki/OPA!)