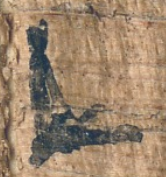 This is is the character from the Sensen Papyrus identified as "Kolob" in the Egyptian Alphabet and Grammar.  Here is the location on the papyrus of this character (encircled in red): 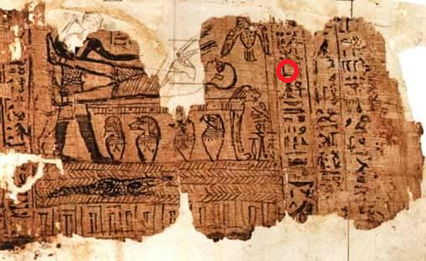 Next, here are some comparisons: 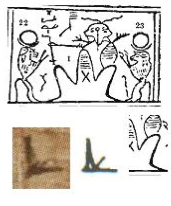 Now, visually compare this from another Hypocephalus that is kept in the British Museum with these other images above:

Now you can see what I'm talking about.even more clearly, right?  A clear visual pun.  You can see in this case, the seated Khnum-Ra/Kolob character more immediately resembles the pictures above that show how this form is visually shared between these characters.  In this particular hypocephalus, we have four rams heads in the Kolob figure, which is linked with Aries, which is directly linked with Alpha/Aleph and the Sun.  Aries is the Solar-Zodiacal equivalent to Aleph in the Semitic Alphabet, and linked to the Ox-head glyph that was used to represent Aleph pictographically from the Egyptian hieroglyphics in the Proto-Sinaitic (the original Semitic Alphabet, that contained re-purposed Egyptian Glyphs:

Here again is another high-res image from the KEP with the character plainly showing Kolob next to it with a few other characters transcribed from the columns of the Sensen Papyrus: 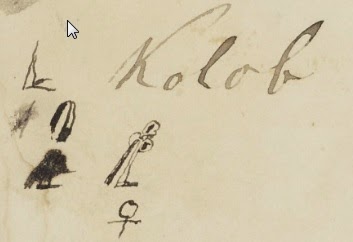 As Michael Rhodes shows, this character in the columns in the Sensen Papyrus has a hieroglyphic version.  In the Egyptian Alphabet, is the character for "woman" (Gardiner's sign list B1) in the name Taykhebyt, the mother of the owner of the papyrus, Hor.  It is the determinative (context-helper) that marks her as a woman.  It is also the hieroglyph used for "queen."  Here is the hieroglyphic:

As you can see, part of the reason this hieroglyph was chosen in the Egyptian Alphabet is because of its visual affinities to the Khnum-Ra character.  But this is not the whole reason.
First, the name Khnum is a pun on the Egyptian word for woman, Kemet (the T being the feminine ending of the word).  Because the Kh and the K are in the word, and the M is in the word, therefore being a sounding-similar kind of pun between the names.
Next, there is the visual pun we pointed out between the images of Khnum and the woman glyph.  However, also, the fact that the woman is shown in sitting/squatting position is important.  This is, of course, because it is connected with the birth (creation) process: 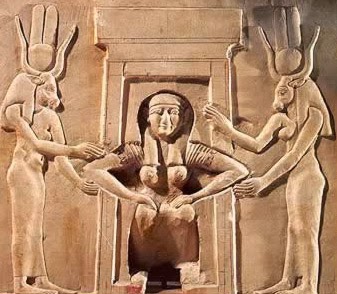 This is a picture of a woman in childbirth, in the squatting position, being assisted by the goddesses Hathor and Taweret, taking the place of the baboons.  We read:

As in all areas of daily life, the gods of Egypt were connected to the birth process. The creator-god Khnum gave health to the newborn after birth. Women would place two small statues for the gods Bes and Taweret. The dwarf-god Bes was supposed to vanquish any evil things hovering around the mother and baby. The chief deity of women in pregnancy, childbirth, and breastfeeding, was the pregnant hippopotamus-goddess Taweret, often carrying a magic knife or the knot of Isis. (http://www.touregypt.net/featurestories/mothers.htm)

Since I originally posted this post, I added another post, where toward the end, it shows the connection between childbirth and the the sky goddess Nut, which is directly connected to this.  What I'm talking about is toward the end of this post at this location:

As I observed in that post, the Egyptologist Miatello observed:

The paths leading the sun to the rebirth in the middle of the two skies (N. and S.) are depicted around the rectangle, and, in variants of Xnm.t wr. . . As the Sun evolves in the uterus of his mother, the concept of sun disk merges with that of disk of the sky. This explains the label of the disk “united with the great one”: the object is both the belly of Nut, in light pink color, and the sun, in yellow. Such a symbolism is re-proposed in late periods with the hypocephalus, which represents the sun disk, and whose central scene depicts the solar rebirth between the lower and upper sky. The sun disk merges with the belly of Nut in a scene on the internal base of the Ptolemaic coffin of Tanethep (Louvre D39). Nut is depicted naked, with her belly shaped as the sun disk. Both the womb and the breasts of the goddess are likened to the sun disk. The three sun disks in her body, representing three stages of the solar cycle, are evoked by three Sn signs above her head . . .

(See the other post for the information on the source of the quote.)  And here is the picture Miatello supplied:

So, its like a chant, above her head, with her arms upward, with the word Sen, three times:  Sen, Sen, Sen.  And as you can see, the belly and breasts are the sun hieroglyph.

As a side note, it is interesting that our own words Sun and Shine are derived from a word very similar to Sen.  Here is the derivation:

As you can see, the derivation of this comes from the Pre-Indo-European root that *s(u)wen- which is manifest in the Avestan (Aryan) xueng (shueng), which is a cognate to the Egyptian Sen.

Anyhow, again, here are the forms of the Sun Hieroglyph supplied by Miatello:

Form 4 is the hypocephalus form itself with its outer rim.  And they are connected with these forms of the Oroboros, or snake-encircled character, like the Egyptian game of Mehen:

Here is a version of the sun god encircled by the snake: 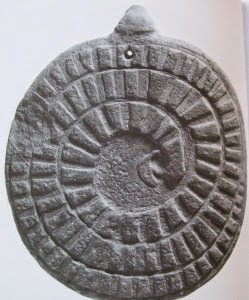 And now look at the Kolob Hieroglyph from the hypocephalus that we showed above here again:

Do you see the snake to the left that is encircled?  Here it is as a close-up: 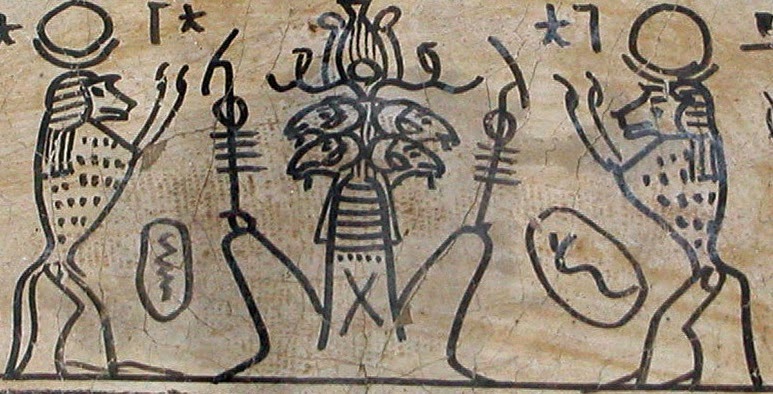 So, remember, Khnum-Ra is the god of creation, and above is the hieroglyph of a woman in the birth process.  Khnum gives health to the baby.  Remember, in the explanation for Facsimile #2, Character 1, Kolob is the First Creation.  The theme between the characters that Joseph Smith identified as Kolob is consistent, both in Facsimile #2, as well as in the Sensen Papyrus.  Clearly, the word Kolob is a Semitic word meaning, near, center, etc. that was an acrophonic assignment to this character, inasmuch as Kolob is the first creation, not to mention the fact that Khnum also starts with a K/Kh sound.  This is directly connected to the goddess Nut of the sky, who has the sun hieroglyphs as her breasts and belly.

Here is a link to something that a former LDS apologist named Kerry Shirts once wrote on Khnum-Ra: